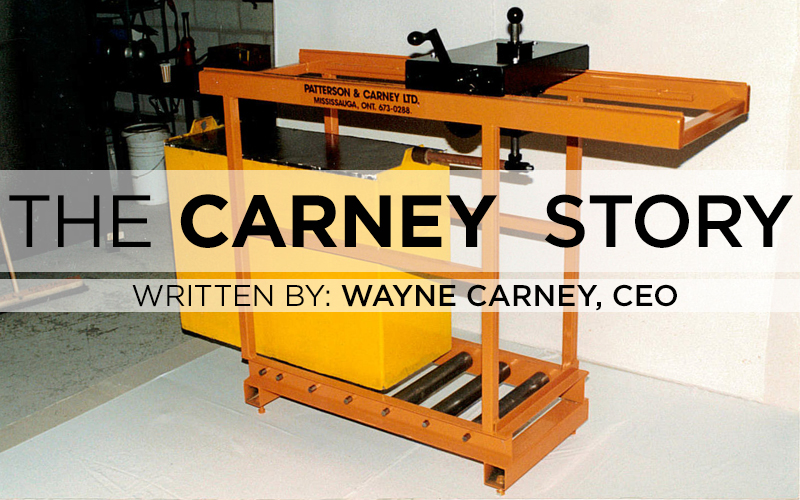 Each company has its own unique beginning and ultimately its own story. This is the story of Carney Battery Handling.

In 1984 a fishing buddy of mine, Wayne Patterson, approached me and suggested we register a company to build battery handling equipment. He was a millwright and I was a sheet metal worker. Both of us were hard workers but extremely naive to the world of business, however it probably was this lack of experience that allowed us to become successful.

In the summer of 1984, we started building our first manually powered battery changer in my garage. However, we soon realized that we needed more space, so on November 16th Wayne and I registered “Patterson and Carney Ltd.” and rented a 1000 sq. ft. industrial unit so we could complete building our small battery changer. This battery changer was specifically designed to only change batteries in reach trucks and order pickers.

During this time, we both had full time jobs. Wayne was a maintenance mechanic at Safeway Canada, and I was a sheet metal worker at Danhart Sheet Metal doing specialized renovations. I had the perfect job because it allowed me access to numerous industrial facilities which is where our opportunities would be.

One day when I was working at the Carling O’Keefe Brewery in Mississauga Ontario (now Molson’s), I was told that they were relocating and updating their battery room. Bingo!!! This was the moment we were waiting for. On inquiry, I found out that the project was being handled by Carling’s Chief Engineer, Bill McGregor. He worked out of an office on Eglinton Avenue, so on Friday afternoon I put on my suit and walked into his office. I explained who I was and that my partner and I had started a business that designed and built battery charging rooms. He looked at me for a moment and then pointed out of the front window in his office and said “As you can see, I have 25 draftsmen and 10 engineers right here in front of me, so why do I need you?”

I told him, “You need me because this type of installation is very specialized, and your Engineering department may not be aware of what customized equipment is available and therefore they may not design the best solution. The biggest advantage of using our equipment is that we can store and charge a very large number of batteries in a very small space.”

We talked for a few more moments then he turned to me and said, “Thank you very much for taking the time to come in but I think we will be fine with our current design.” I didn’t show my disappointment but rather handed him my business card and said, “Okay but if you change your mind or if you are not able to fit all of the batteries into the new battery room, please give me a call and allow me the opportunity to design a layout for you.” We shook hands and I left.

Less than a week later, Bill called me on Wednesday morning to say they could not fit all the batteries into the room and asked when I could come in to see him. I was at his office the very next day. He handed me an overview along with all the equipment specifications and said, “I need a layout and quotation by Monday morning.” I agreed and scrambled out to start the project. On Monday morning, I was back in his office with a full layout and quotation. I rolled the drawing out on his desk and he quickly went through it. He then turned to me and said, “I like it. How much and when can you deliver?” “$120,000 and we can ship in eight weeks,” I replied. “That is not good enough. I need it in 4 weeks,” he said.

I knew this was impossible because both Wayne and I had full time jobs, no employees, a 1000 sq. ft shop, and Bill was not aware that we had never designed or built anything like this before. For the next 10 minutes, we negotiated back and forth about the delivery and finally I said, “Okay, if you want me to say we can deliver in four weeks then I will, but you are not going to get any equipment before eight weeks.” He agreed and proceeded to write me a purchase order for $120,000.

Needless to say, I floated out of his office. This was a nice order even by today’s standards, never mind that it was 1985.

When I arrived back at the shop, my business partner Wayne asked, “How did you make out?” I replied, “Fantastic, I got a P.O. for $120,000.” He was speechless for a moment then a blank look came over his face and he said, “WHAT THE HECK DID YOU SELL THEM?”  “Well, they have 120 lift trucks, so I designed a system that has three small overhead bridge cranes to lift the batteries out of the trucks and four man-aboard transfer carts where each one runs up and down between two rows of batteries,” I replied.

He looked at me in a state of shock and asked, “What the heck is a man-aboard transfer cart?” I responded, “It is a machine that the operator rides on and it pulls the batteries off the roller stands.” He was silent for a moment and then he said in a calm voice, “I’ve never built anything like this before.” I said, me neither, but that’s okay, we will get it done.

This was our first project and it was a complete success. We delivered in eight weeks and the system remained in use for more than 20 years.

During the same time, on another one of my Danheart projects I was installing a new boiler at the Chrysler Trim Plant in Ajax, Ontario. I heard that they were re-designing their current battery room so, once again I immediately saw an opportunity and inquired into who was managing the project. I was informed that the plant manager, Bob Lexel, was the person in charge. I got directions to his office and headed straight there. I was still in my coveralls, so I began by clarifying that I was working on the new boiler installation and had heard that they were in the process of building a new battery room. I explained that my partner and I had just recently started a new business that specialized in designing and building battery changing rooms and we would like to do a floor plan layout and quotation for him. He was very receptive and said, “Sure go ahead, however there is one condition – whatever you design has to include a ventilation system. We currently have over 2000 people working in the facility and we have no air conditioning, so during the summer we open the west and the east doors to allow the breeze to flow through for cooling. Our problem is that the battery room is on the west side of the building and nearly impossible to relocate. The result is that all the fumes from the battery room flow through the entire plant and it has become a health and safety issue.”

I assured him that this would not be a problem because ventilation and air conditioning are my background and specialty.

I gathered all the necessary information and headed home to start the design. A few days later, I returned with my proposal and went to his office. He greeted me and asked to see what I had designed.  I quickly rolled out the drawing and quotation on his desk and he began to go through it. After a few moments he looked up and asked, “How much?”

“$80,000,” I replied. “Okay, it looks good. When can I see a system?” I paused for a moment and then said, “Actually, I don’t have a system too show you.” He slowly turned to me with a funny look on his face and said, “Wait a minute, let me get this straight. You want me to spend $80K on a system that you have never built?”

Without hesitation, I replied “Yes, this is state of the art technology and you are asking for a custom ventilation system. This is why I have nothing to show you. However, I do have a small manual unit (the one we started building in my garage) that we can demonstrate for you. This will give you and your people a good idea of the concept that I am proposing.” After a short pause he turned to me and said, “Okay, be here on Friday afternoon at 1:00 PM.”

Wayne and I arrived at 12:30 PM to set up our little manual unit in the battery room for the demonstration. At 1:00 PM I was surprised and a bit nervous when Bob showed up with a dozen people including engineers, the entire Safety Committee and some upper management to see our little Battery Bull in action. I glanced at Wayne and saw the anxiety in his face, so I pulled him to one side and said, “Don’t say a word. Just do the full demo start to finish without stopping and don’t make any mistakes. I’ll do all the talking and answer their questions.”

The demo went flawlessly and after I finished answering all their questions, Bob and I went back to his office. We sat down and I asked what he thought. “I will give you a P.O. on two conditions,” he said. “First you have to give me a written guarantee that the ventilation will work, and second you have to complete the installation during our two-week shut down over the Christmas holidays. “No problem,” I replied. “We will be complete by the end of the first week.” Bob looked at me and said, “Don’t be so quick. If you finish on time, you will be the first contractor in the history of this plant to be ahead of schedule.”

Thankfully, we once again completed the project on time and the ventilation system worked perfectly. In fact, we still use this exact same ventilation design today, which continues to exceed today’s current Ministry of Labour safety standards and has become one of the key elements in our battery room designs. We are proud to say that over the years, we have been approached by numerous engineering consultants requesting permission to use our ventilation design on some of their battery room projects. There is no doubt that this has helped to differentiate Carney Battery Handling from the competition.

It was these two projects in 1985 that provided the foundation for what has become known as Carney Battery Handling.

Over the years there have been many milestones along the way as the company has grown into its current structure. Since 1985 we have evolved to become Carney Battery Handling Ltd., now recognized as a worldwide leader in the innovation and manufacturing of critical battery room solutions and battery handling products.

Wayne Carney is the Founder and CEO of Carney Battery Handling Ltd.